Endometrial polyps (EMPs) are localized overgrowths of endometrial tissue that are composed of endometrial glands, stroma, and blood vessels. The reported prevalence of EMPs increases with age and ranges from 8-35%, depending on the population studied. EMPs are generally considered to be benign, with risk of malignancy around 3%. However, EMPs have been associated with several endometrial cancers. For example, endometrioid adenocarcinoma and its precursor atypical hyperplasia/endometrioid intraepithelial neoplasia (AH/EIN) are common incidental findings in EMPs. Up to 31% of cases of endometrial serous carcinoma have been reported as confined to EMPs, and cases of clear cell adenocarcinoma and carcinosarcoma have been reported as confined to EMPs as well. But the link between EMPs and endometrial cancers is poorly understood, as is the underlying genetic origin of EMPs. In this study, the authors used a comprehensive NGS cancer panel to detect genetic alterations in thirty-one EMPs and to help clarify the status of EMPs as potential clonally-derived neoplasms.

Cases were selected from patients ≥50 years old who received a hysterectomy at the UT Southwestern Clements University Hospital between 2010 and 2020. Cases with a concurrent or prior diagnosis of AH/EIN or any uterine malignancy were excluded, and all cases were reviewed to confirm the presence of an EMP and absence of a uterine malignancy or premalignancy. Adjacent normal tissue removed during the hysterectomy, such as ovary or cervix, was used as control (i.e., “germline”) DNA during NGS analysis. DNA and RNA sequence analyses were conducted to detect single nucleotide variants, indels, and gene fusions for over 1500 cancer-related genes across human malignancies, not just those specific to endometrial or gynecologic malignancies. Only one gene fusion of indeterminate biological significance was detected in one case (MYH9::SNHG16, chromosomes 22:17). There were no gene fusions detected that were likely to represent EMP drivers. Of note, the authors did not detect any gene fusions involving chromosome 6p as had been reported in earlier studies of EMPs conducted in the 1990s. This result was confirmed via break-apart fluorescent in situ hybridization (FISH) assays for the HMGA1 and HMGA2 genes that were performed on a subset of 16 EMPs. These two genes had been identified as possible targets of rearrangements in two earlier studies, but were not shown to be rearranged via NGS or FISH in this study. As the studies conducted in the 1990s had used karyotyping to detect these chromosomal rearrangements, it is possible that those early reports represented tissue culture artifacts. 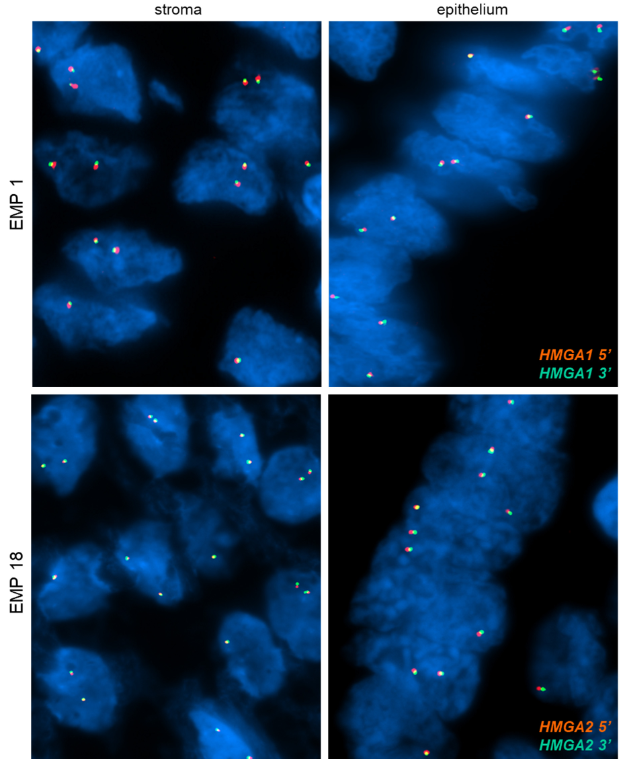 Copy number analysis using CNVKit did not detect any significant or recurring regions of amplification or deletion in the 31 EMP samples. However, many single nucleotide variants were identified, of which 46 were classified by OncoKB as known oncogenic drivers. Many well-established and common endometrial cancer mutations were identified among these EMPs, including mutations in AKT1, ARID1A, BCOR, FBXW7, KRAS, PIK3CA, PIK3R1, PTEN, and TP53. This finding was remarkable in that the NGS panel had been designed for detection of cancer driver mutations across human malignancies and not just endometrial or gynecologic cancers. Analysis of the set of variants found in these EMPs against all of the TCGA data sets for diverse human malignancies returned Uterine Corpus Endometrial Carcinoma as the human tumor type that most closely matched the identified mutations in EMPs, with uterine carcinosarcoma as the second-best match. Similarly, analysis using the MSK-IMPACT dataset identified endometrial cancer as the cancer type that most closely matches the mutational spectrum identified in these EMPs.

To further examine this link between EMPs and endometrial cancer driver mutations, the authors analyzed the variant allele frequencies (VAFs) for each mutation. High variant allele frequencies would indicate clonal mutations that occur early in tumor evolution whereas low variant allele frequencies would indicate later, subclonal mutations. In this sample of EMPs, VAFs were typically 1-5% or lower, with only 8/46 mutations (17.4%) in the 5-10% range. Thus, it appears that EMPs are not clonally-derived neoplasms; oncogenic driver mutations are common but occur later in the development of EMPs. The authors propose a model in which these mutations are not EMP-instigating but accumulate in the EMP with age, as the tissue within the EMP is not shed during the menstrual cycle. This model helps to clarify the association between EMPs and cancer, is consistent with age being the factor most strongly associated with malignancy in EMPs, and supports hysteroscopic removal of EMPs when clinically feasible.