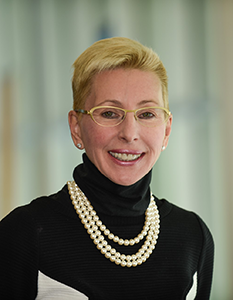 Dr. Nowak is recognized as a leader in the field of human genomics.  Her research contributed directly to the Human Genome Project, as well as to genomic based approaches to understanding heritable disorders and cancer. Dr. Nowak is the founder and Chief Scientific Officer of Empire Genomics. In 2015, Dr. Nowak was named executive director for the University at Buffalo (UB) New York State Center of Excellence in Bioinformatics and Life Sciences, and holds the rank of Professor of Biochemistry. Dr. Nowak was appointed to the Empire State Stem Cell Board in 2014.  She also serves as Principal Investigator, UB Center for Advanced Technology in BIG Data and Health Sciences, as of the July 1, 2017 redesignation.

Dr. Nowak previously served as the director of science and technology for UB’s New York State Center of Excellence in Bioinformatics and Life Sciences from 2003-2015, as well as director of the UB/Roswell Park Cancer Institute (RPCI) Genomics Facility from 1999-2012, a collaborative research lab shared by UB School of Medicine and Biomedical Sciences and RPCI. Prior to that, she was involved for 14 years in research at RPCI developing physical clone resources for cloning disease genes and mapping the human genome.

Among her major achievements, Dr. Nowak has authored landmark papers describing the cloning of several heritable cancer disorders, including a form of Ataxia Telangiectasia (Nijmegen Breakage Syndrome). Her work on the Human Genome Project was published in the 2001 landmark genome issue of Nature describing the sequencing of the human genome. Dr. Nowak led and coordinated the three groups for the NCI extramural Cancer Chromosome Aberration Project. As part of this project, Dr. Nowak also developed BAC based array CGH (Comparative Genomic Hybridization), a microarray-based method for identifying numerical differences in DNA between tumor and normal cells and cells from individuals with genetic disorders, including autism and other developmental disorders. The results of this work were published in Nature Genetics. She also was a key member of the GENSAT project studying spatial and temporal gene expression during development of the central nervous system in mice, and this work was published in the 2003 genome edition of Nature.  Dr. Nowak received the 2008 American Association of Cancer Research (AACR) Team Science award for the development of CGH (Comparative Genomic Hybridization) and array CGH technology. In addition she was awarded the 2008 Thomas B.Tomasi award for her outstanding achievements in science by the Roswell Park Cancer Institute.

Dr. Nowak's efforts were instrumental in obtaining more than $70 million in funding for research and infrastructure and she has authored or co-authored 145 research articles in leading scientific journals.  She also has served on the editorial board of Cytogenetics and Genome Research as well as an Associate Editor of Physiological Genomics.