The accumulation of amyloid-β precursor protein (Aβ) plaques is characteristic of both cerebral amyloid angiopathy (CAA) and Alzheimer disease (AD). Duplications of the amyloid-β precursor protein (APP) gene, which is located on 21q21.3, have been linked to early onset CAA and/or early onset AD. These copy number variations result in increased levels of APP messenger RNA (mRNA) in the blood and APP overproduction, which leads to Aβ deposits forming in the brain parenchyma and within vessel walls. In this case, the authors report a triplication of the APP gene along with a relative increase in mRNA expression in a family with autosomal dominant early-onset CAA and AD.

The proband presented with an aggressive course of episodic memory loss, attention deficit, and executive dysfunction at age 39. By age 41, the proband fulfilled the diagnostic criteria of probable Alzheimer disease with evidence of the AD pathophysiologic process, in association with probable CAA following the modified Boston criteria. As shown in the partial pedigree, the proband’s father had also fulfilled the diagnostic criteria of probable AD and probable CAA. His father had presented at age 37 years with transient loss of consciousness followed by progressive behavioral disorders, severe cognitive impairment, episodic memory loss, and praxis and visuoconstructive moderate dysfunction. By age 44, his father’s condition was extremely severe with repeated loss of consciousness episodes and major upper cerebral dysfunction. The proband’s father died at age 48 years after a hemorrhagic event.

Quantitative multiplex PCR of short fluorescent fragment (QMPSF) analysis revealed 4 copies of the APP gene in the proband. No point mutations were detected in exons 16-17 of APP and his APOE genotype was 33, suggesting that the triplication was the sole genetic change involved in the proband’s condition. The unaffected mother carried 2 copies of APP, suggesting a 3+1 genotype in the proband. Fluorescent in situ hybridization (FISH) showed an asymmetric positive hybridization signal on chromosome 21 long arm without other signal hybridization anywhere else, which further supports a 3+1 genotype in the proband and autosomal dominant transmission of a triplication. Finally, array comparative genomic hybridization (aCGH) determined that the triplication was restricted to the whole APP gene without any flanking gene coding sequence, suggesting that increased APP expression alone is sufficient to cause EOAD and CAA. 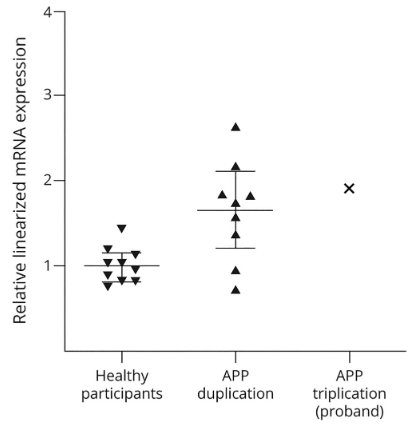 To determine if the gene triplication resulted in overexpression of the APP gene, the proband’s mRNA APP levels were assessed using reverse-transcription-digital droplet PCR. Compared with 10 normal controls, the proband showed a twofold increase in relative APP mRNA levels. This increase in APP mRNA would lead to APP overproduction, resulting in severe Aβ deposits. Indeed, cerebral biopsy of the proband’s father showed significant amyloid perivascular deposits. Nine patients with APP duplication showed a median of 1.8-fold increase in APP mRNA levels relative to controls. Further research will be necessary to determine if APP triplications result in significantly increased mRNA levels than duplications and what, if any, effects this increased expression has on disease presentation or age at onset