Paraneoplastic syndromes are rare disorders co-occurring with cancer that are not directly related to the local presence of tumor cells, but result from the generation of autoantibodies, cytokines, hormones, or peptides in response to the malignancy. These syndromes have complex manifestations that can affect multiple organ systems, including the neurological, dermatological, gastrointestinal, endocrine, hematologic, and cardiovascular systems. Paraneoplastic cerebellar degeneration (PCD) is a paraneoplastic neurologic disorder most frequently associated with breast and ovarian cancers that causes progressive cerebellar ataxia and can result in permanent disability. Approximately half of PCD cases are associated with anti-Yo autoantibodies directed primarily against Yo antigen CDR2L (cerebellar degeneration-related protein 2-like). Genetic alterations including CDR2L copy number gain and somatic mutations in CDR2 or CDR2L have been reported in Yo-PCD ovarian cancers but have yet to be quantified in Yo-PCD breast cancers. In this study, the authors examine the mutational status and gene expression profiles of Yo-PCD breast cancers to fill this knowledge gap. In addition, they characterize the clinical, histopathological, and immunologic features of Yo-PCD breast cancers to identify mechanisms that may reflect breast cancer-specific pathogenesis.

Twenty-nine patients with breast cancer and Yo-PCD were retrospectively selected from the archives of the French Reference Center for Paraneoplastic Neurological Syndromes in Lyon, France. For each patient, all available tumor samples were included in the study. A vast majority (91.1%) of the Yo-PCD breast cancers were invasive carcinomas of no special type; 55.9% were Nottingham grade 3 and 17.6% were grade 2. HER2 was overexpressed in 85.3% of Yo-PCD breast cancers, with ERBB2 (which encodes HER2) amplification in 77.2% of samples. This was an interesting result because Yo-PCD ovarian cancers do not display ERBB2 amplification, which suggests a breast-cancer specific role of ERBB2 in PCD pathogenesis. Progesterone and estrogen receptor expression was negative in 76.4% of samples. In sum, two thirds (67.6%) of the cases with Yo-PCD in this study were HER2-positive, HR-negative invasive carcinomas of no special type. With typical rates of HER2+/HR- breast cancers at approximately 4%, this histopathologic signature appears to be a hallmark of Yo-PCD breast cancers.

Mutational status and gene expression profiles of 22 samples from 17 Yo-PCD breast cancer patients were compared to a control group of 15 HER2+/HR- breast cancer patients without Yo-PCD from the Biopathology Department of Centre Léon Bérard. DNA and/or RNA sequencing detected somatic mutations in CDR2L or CDR2 in 62.5% of the Yo-PCD tissue samples; these mutations were not detected in the matched controls. Both comparative genomic hybridization assay and fluorescent in situ hybridization (FISH) were used to detect copy number variations in CDR2L, with amplification (≥6 copies of CDR2L) detected in 61.5% of Yo-PCD samples and only 6.6% of control samples (p < 0.0001). Every Yo-PCD patient had at least one alteration in CDR2L or CDR2. RNA sequencing also revealed statistically significant overexpression of CDR2L transcript in Yo-PCD breast cancers compared to controls, which was confirmed by IHC staining (p = 0.02). Thus, CDR2L alterations are frequent in Yo-BCD breast cancer and may interact with ERBB2 amplification to result in PCD pathology. However, while ERBB2 and CDR2L both are located on the same chromosomic region (17q21-25), analysis suggested that these amplifications were independent, and FISH ruled out a double-minute chromosome. Further research is needed to elucidate the relationship between these two proteins in Yo-PCD pathogenesis in breast cancers. 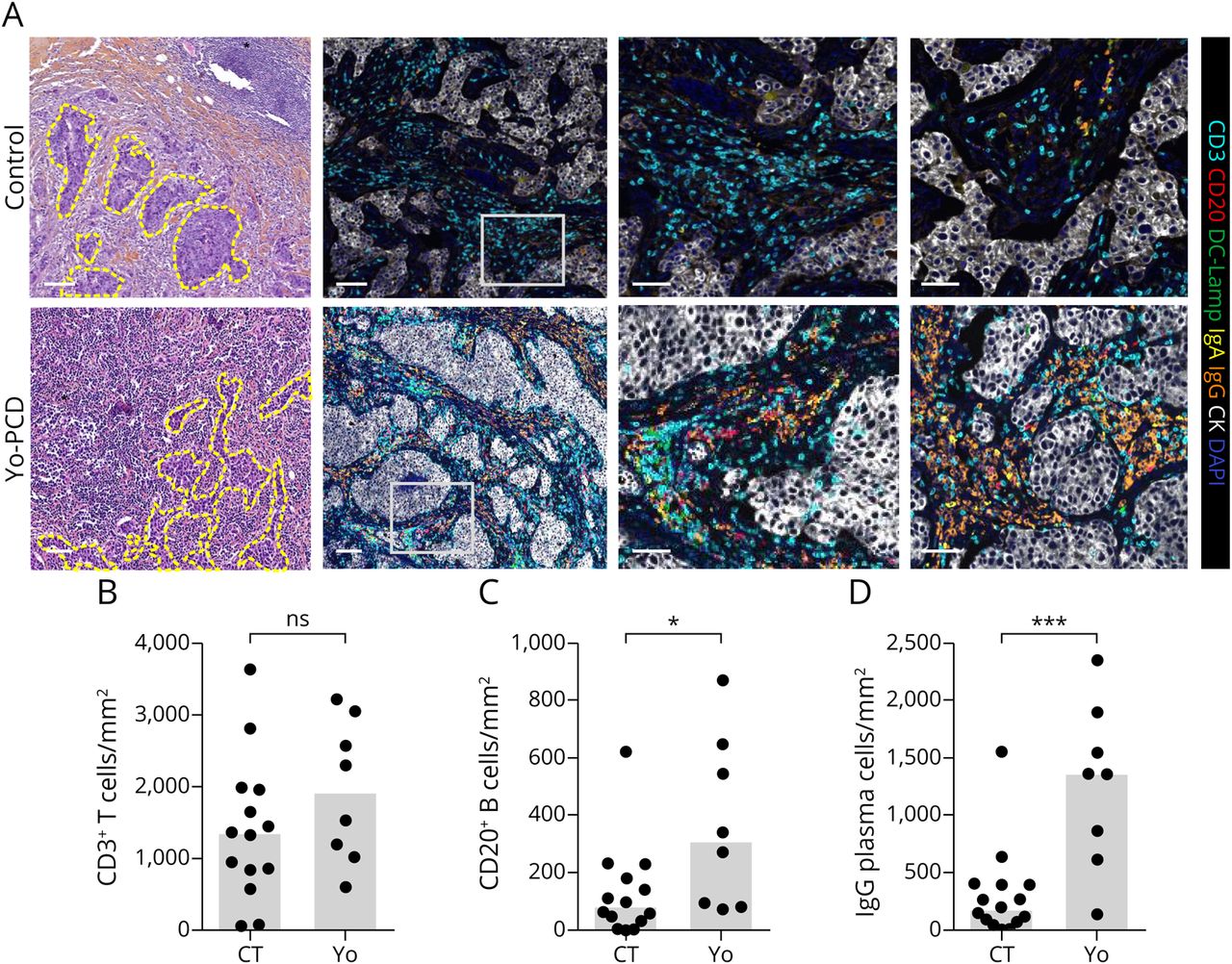 Finally, a Yo-PCD breast cancer transcriptomic profile was described, which featured 54 consistently downregulated and 615 consistently upregulated genes compared to controls. The downregulated cluster contained genes related to the extracellular matrix (ECM), while the upregulated cluster contained genes related to adaptive immune activation, including enrichment in B-cell and T-cell activation and proliferation pathways, which suggests a much more intense immune response compared to controls. A microenvironment cell populations counter analysis revealed that 6/9 Yo-PCD samples had high T-cell and B-cell counts. All nine Yo-PCD samples had elevated levels of plasma cells compared to controls based on the overexpression of plasma blast genes TNFRSF17 (p = 0.0026) and MZB1 (p = 0.0476), and multiplex immunofluorescence showed a massive infiltration of IgG plasma cells in Yo-PCD breast cancers compared to controls (p = 0.01). These immunologic results recapitulate the key role of the humoral immune attack and the production of anti-Yo autoantibodies in Yo-PCD development. Using the clinical, histopathological, and immunologic features described here, Peter et al propose a model of Yo-PCD breast cancer development in which immune cells initially mount a strong anti-tumor attack, resulting in shrinkage of the tumor (58.8% of their population was T1 or lower) and high prevalence of occult breast cancer (20.5% in their study population). However, based on their finding of frequent (67.6%) early lymph node metastasis in Yo-PCD breast cancers, they hypothesize that the under expression of ECM compounds may promote tumor cell migration, which escapes immune surveillance, perhaps because immune cells are exhausted. Clinically, the authors recommend that when evaluating a patient with Yo-PCD and an occult tumor, axillary lymph nodes should be promptly analyzed, even without evidence of ipsilateral breast cancers. In addition, due to the predominance of HER2+ among Yo-PCD breast cancers, they suggest that a finding of HER2- in the diagnostic workup may imply the presence of an additional tumor site.