Allogeneic hematopoietic cell transplantation (alloHCT) is used to treat a variety of hematologic malignancies and represents the best chance for cure for many patients with these disorders. The effectiveness of alloHCT relies primarily on graft-versus-tumor (GVT) reactivity facilitated by donor T cells, which identify and eliminate remaining tumor cells. However, over a third of patients will relapse following alloHCT, with the greatest risk of relapse within the first 12 months following treatment. Patients who relapse after an alloHCT have limited treatment options and patient outcomes remain poor; indeed, disease relapse is the most common cause of death among patients that receive an alloHCT, and over half of patients who relapse will die within one year. Thus, there is a significant clinical need for effective therapies for patients that relapse after alloHCT. Here, Godfrey et al report the outcomes of a pilot study (NCT02981914) designed to determine the safety and efficacy of standard-dose pembrolizumab (anti-PD-1) among patients with hematologic malignancies that relapse after receiving an alloHCT. Pre-clinical studies have suggested that therapeutic PD-1 blockade can help to intensify the GVT effect, and studies of patients with classical Hodgkin lymphoma who relapsed after alloHCT showed high clinical response rates to anti-PD-1 therapies. Unfortunately, serious and often fatal immune-related toxicities, including graft-versus-host-disease (GVHD), have been reported in patients receiving anti-PD-1 therapies post-alloHCT. As a result, the primary objective of this study was to determine the tolerability of pembrolizumab in patients with relapsed hematological malignancies post-alloHCT, with secondary objectives including assessment of objective response rate (ORR), duration of response (DOR), and overall survival (OS).

Twelve patients with histologically confirmed disease relapse following alloHCT were enrolled: 8 patients had acute myeloid leukemia (AML), 2 had diffuse large B-cell lymphoma (DLBCL), 1 had classical Hodgkin lymphoma (CHL), and one had myelodysplastic syndrome (MDS). The median time from alloHCT to study enrollment was 587 days (101-4211 days). Study design required that patients not have a history of grade 3 or 4 acute GVHD or any stage of chronic GVHD. All patients had received in vivo T-cell depletion as part of GVHD prophylaxis. All enrolled patients were treated with 200mg pembrolizumab intravenously every 3 weeks for up to 2 years unless disease progression or the development of a dose-limiting toxicity (DLT) occurred. All patients received at least 1 cycle of pembrolizumab treatment and were assessable for toxicity. A median of 3.5 cycles of pembrolizumab (1-17 cycles) were administered. Adverse events were monitored every three weeks. At the time of data cutoff, all patients were off pembrolizumab treatment; reasons for stopping pembrolizumab included a DLT in 3 patients, nausea and vomiting (non-DLT toxicity) in 1 patient, development of therapy-related MDS (not related to study treatment) in 1 patient, and disease progression in 7 patients. 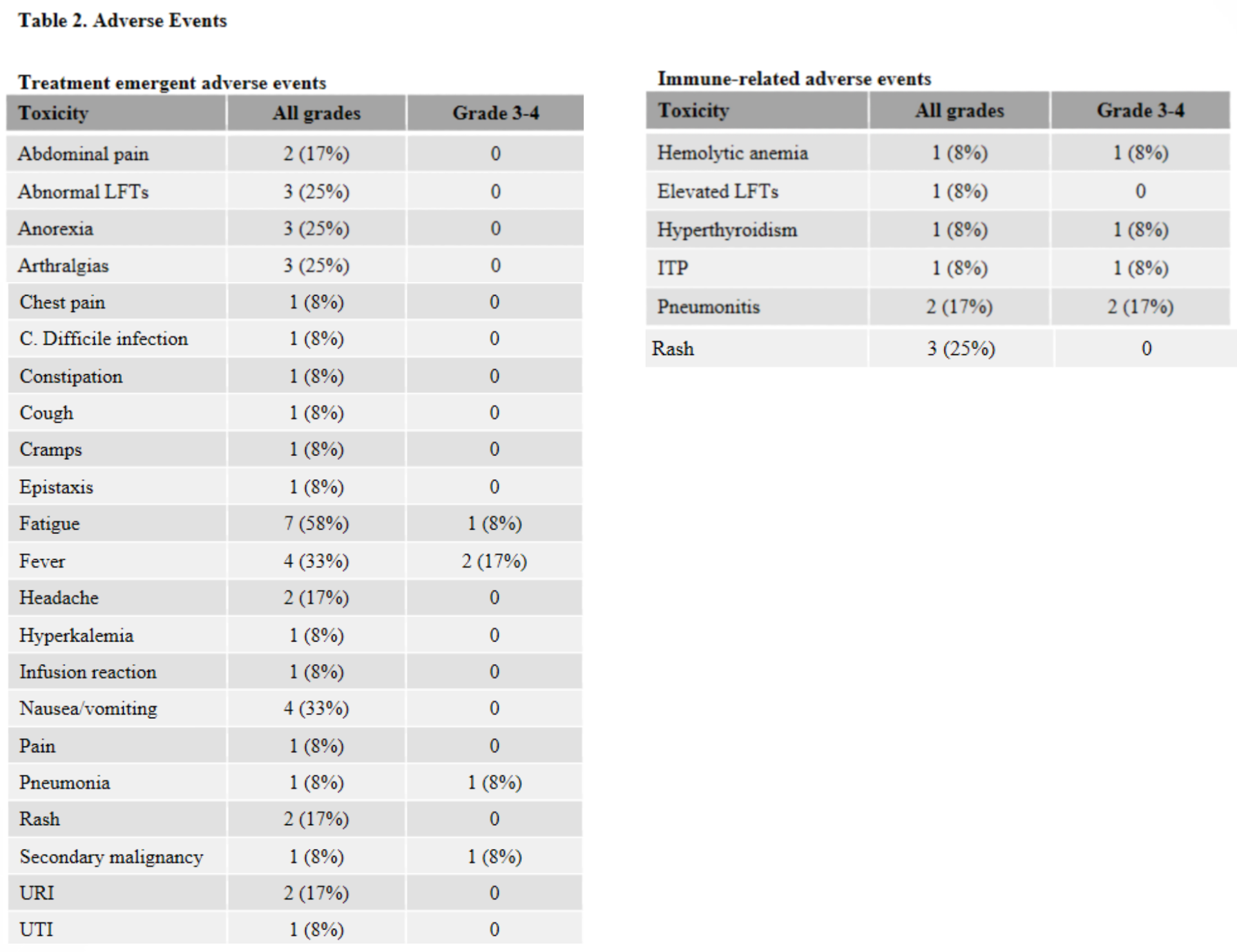 No treatment-emergent GVHD was observed in the 12 study patients, and no exacerbations of GVHD was seen in the 5 patients with a history of grade 1 or 2 acute GVHD. However, immune related adverse events, including severe toxicities, were observed in 42% of treated patients, with 3 subjects (25%) experiencing a DLT. This is in line with other recent phase 1 trials that evaluated ipilimumab (anti-CTLA-4) and nivolumab (anti-PD-1) in patients relapsing post-alloHCT. In those studies, GVHD was observed in 14% and 39% of patients, respectively. The lack of GVHD in this study could be attributed to study inclusion criteria (i.e., subjects with a history of chronic GVHD were not eligible for the present study but were eligible for the other two) or the fact that all patients in the present study had received in vivo T-cell depletion, which has been shown in retrospective analyses to decrease the risk of developing GVHD when receiving PD-1 blockade therapy. As most immune-related toxicities in this and other studies developed within the first 1-2 cycles of treatment, the authors recommend early vigilant monitoring in patients receiving off-label pembrolizumab treatment, including immediate cessation of anti-PD-1 therapy and initiation of corticosteroids or other immune-suppressant medications for any patient developing immune-related adverse events.

Efficacy endpoints could be assessed in 9/12 patients; three subjects were not evaluable due to the development of an early DLT. The ORR was 22% (2/9); best overall responses included complete response (CR) in 2 patients, stable disease (SD) in 2 patients, and progressive disease (PD) in 5 patients. The median DOR was not estimable. Median PFS was 2.9 months, and median OS was 23.3 months. After a median follow-up of 4.4 years, 9 patients have died, with the most common cause of death being PD. Both patients with relapsing myeloid malignancies (1 patient with AML and 1 patient with MDS) did not respond to pembrolizumab treatment, and the authors suggest that anti-PD-1 therapy may not be warranted in this population, given the potential side effects. Of the two patients that achieved CR to pembrolizumab, one had DLBCL and the other had cHL. Both were determined to have PD-L1 gene (CD274) amplification by fluorescent in situ hybridization and strong PD-L1 protein expression in pre-treatment biopsies. So, in addition to clinical parameters such as time from receiving alloHCT, history of GVHD, and utilization of GVHD prophylaxis regimens, it may be clinically appropriate to consider PD-L1 gene alterations when discussing the risks and benefits of PD-1 blockade therapy post-alloHCT. Of note, one of the patients that achieved a CR (DLBCL) relapsed one year after pembrolizumab administration began, and whole-exome sequencing revealed an acquisition of a missense EZH2E317K mutation. The authors hypothesize that the EZH2E317K mutation could have mediated pembrolizumab resistance via epigenetic downregulation of major histocompatibility complex (MHC) expression. More research is needed to demonstrate if there is a causal relationship between this mutation and acquired pembrolizumab resistance.