SUCLG2 proposed as biomarker in pheochromocytoma and paraganglioma

Pheochromocytoma, a neuroendocrine tumor of the adrenal medulla, and paraganglioma, a tumor derived from neural crest progenitor cells outside the adrenal gland, have a strong genetic basis, with up to 40% of cases displaying germline mutations and another 25-30% carrying a somatic mutation. The group of known susceptibility genes for pheochromocytoma and paraganglioma (PPGL) includes the succinate dehydrogenase genes SDHA, SDHB, SDHC, and SDHD, which encode the four subunits of the succinate dehydrogenase enzyme (SDH). SDH oxidizes succinate, a known oncometabolite, to fumarate as a part of the tricarboxylic acid (TCA) cycle and converts ubiquinone to ubiquinol during oxidative phosphorylation. Interestingly, even in PPGL cases without an SDHx mutation, reduced SDH activity has been reported, possibly because of mutations in unknown susceptibility genes. In this study, the authors evaluated patients with apparently sporadic PPGL for genetic mutations and report 8 germline variants in SUCLG2, a gene that encodes the GTP-forming subunit of succinyl-CoA ligase (SUCL), another TCA enzyme. These mutations were linked to reduced SDH activity and increased succinate levels in patient tumors and SUCLG2 knockout cells, revealing both an association and possible mechanism between SUCLG2 mutations and PPGL.

Blood leukocyte DNA samples from 352 patients with apparently sporadic PPGL were tested for genetic mutations using a panel of 54 genes developed at the National Institutes of Health. Fifteen (4.3%) patients, including 7 men and 8 women, were found to carry SUCLG2 variants; seven missense mutations and 1 deletion were identified within the GTP-binding domain of the protein. No other known PPGL mutations were identified in patients with a SUCLG2 mutation. None of the patients reported any family history of PPGL; nonetheless, saliva samples from 7 first-degree relatives of 4 patients revealed the presence of the same SUCLG2 variants in the parent and sibling of one case and the parent in two additional cases. Although various cancers were reported in these families, none of them were of PPGL etiology. This suggests incomplete disease penetrance, which has been previously reported for PPGL-related TCA genes including SDHA.

Interphase fluorescence in situ hybridization (iFISH) was performed on available tumor tissues from 3 patients, and gene deletion was detected in 77.2%, 47.8%, and 44.2% of tumor cells, respectively. Immunohistochemistry revealed a substantial decrease in SUCLG2 protein levels in 7 patients with SUCLG2 variants. Metabolomic analysis of tumor biopsies from 6 patients showed an increased succinate-to-fumarate ratio relative to normal adrenal medulla (p=0.02), suggesting a dysregulation of the TCA cycle and a dysfunction of SDH. Western blot analysis of tumor mitochondria showed a substantially decreased level of the SDH subunit B (SDHB) protein, and consistent decreases were seen in SDH in-gel activity. This suggests that the defects in the SUCLG2 protein that result from the identified mutations negatively affect SDH activity. 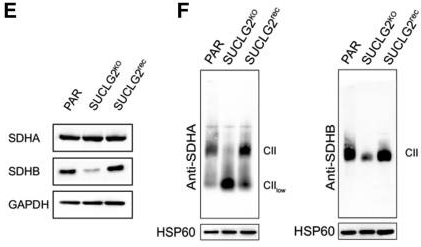 Next, SUCLG2-knockout cells were established to further investigate the role of the SUCLG2 mutations. These knockout cells showed a 10-fold increase in succinate-to-fumarate levels compared to controls (p<0.001), similar to what metabolomic analyses had shown in patient tumors. As succinate is a known oncometabolite, this increase could provide a mechanism for tumor development. The knockout cells also showed downregulation of SDHB as well as suppression of SDH activities to 40.3% of normal levels (p<0.001). Both of these effects could be reversed through subsequent re-expression of SUCLG2 in the knockout cells, which confirms the link between SUCLG2 mutation and SDH activity. Finally, as SDH is a component of the mitochondrial complex II (CII), which is located at the crossroads of the TCA cycle and oxidative phosphorylation, the authors also looked for signs of impaired CII assembly. They detected a low molecular weight CII subassembly by gel electrophoresis and a reduction in CII-dependent respiration (p<0.001) that could be restored by SUCLG2 re-expression. Further research is needed to determine if SUCLG2 mutations consistently lead to CII dysfunction and, if so, what determines the severity of the effect. The authors propose that SUCLG2 is a very strong candidate gene for a PPGL biomarker, as mutations revealed both an association and possible mechanism between SUCLG2 and PPGL. Further patient studies should be conducted to establish its clinical significance.