Plott syndrome, or familial congenital bilateral laryngeal abductor paralysis, was first described by Plott and colleagues in 1964 and has been reported twice since that time. Clinical expression has been limited to male children, and inheritance patterns have suggested Plott syndrome to be an X-linked recessive disorder. However, no conclusive genetic or chromosomal aberration has been reported to date, and no genetic tests have been conducted on any of the affected families. In this case, the authors report a new family with Plott syndrome and present data to suggest that Plott syndrome is caused by a 404kb fragment inserted into the intergenic chromosomal region Xq27.1.

The proband was born at 40 weeks gestation; there were no congenital malformations or comorbidities. Shortly after birth, stridor was noticed and mechanical ventilation was necessary due to respiratory distress. Multiple extubation attempts failed due to recurrence of stridor with progressive respiratory failure. A tracheobronchoscopy revealed that no vocal fold abduction occurred during inspiration, which suggested a congenital bilateral vocal cord paresis. A tracheostomy was performed without complications and the patient was discharged. Family history revealed that seven male newborns had acute respiratory stridor and died within the first days of life due to respiratory distress. These deaths occurred decades ago and no autopsy or genetic testing had been performed on any of them.

Genomic DNA was isolated from peripheral blood samples from the proband (V-3) and his unaffected brother (V-2) for short-read whole genome sequencing (WGS). WGS revealed no convincing coding variant. However, it did identify deletion in an intergenic region on chromosome Xq27.1. Split reads were visible at both breakpoints, with the non-aligned reads mapping to two genomic regions on chromosome 10q21.3. Chromosomal microarray confirmed that this region of chromosome 10q21.3 was duplicated in the proband. Fluorescent in situ hybridization (FISH) analysis also showed an additional signal representing the 10q21.3 region on chromosome X. These data confirmed an interchromosomal insertion event. 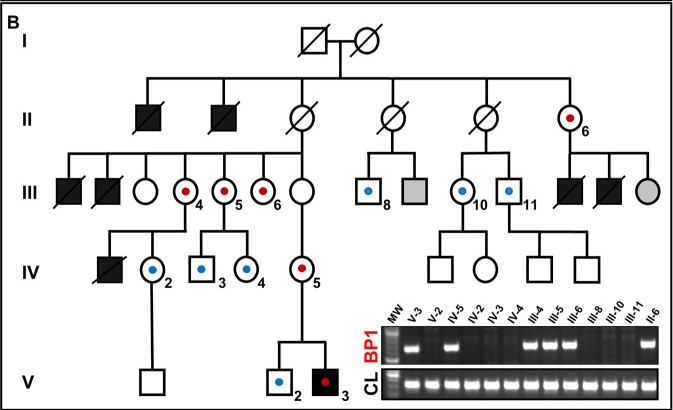 Segregation analysis confirmed this derivative X-chromosome in the proband (V-3) and in the female individuals IV-5, III-4, III-5, III-6, and II-6. Among these female individuals were the mothers of each affected child. The derivative X-chromosome was not found in any unaffected male family member. This strongly supports X-linked recessive inheritance. Since the insertion occurred in an intergenic region of chromosome X, the authors suggest that the phenotypic outcome could be due to altered regulation and ectopic expression of the nearest gene, SOX3. They noted that distinct diseases have resulted from insertions into this same intergenic region of chromosome X, which supports the hypothesis that the different phenotypes could be due to the introduction of regulatory elements. However, further research into the effect of SOX3 expression in neuronal tissue as well as molecular characterization of additional individuals with Plott syndrome is necessary to investigate these hypotheses.