Non-small-cell lung cancer (NSCLC) is a genetically heterogeneous disease. In approximately 2% of NSCLC cases, the primary oncogenic mutation is a chromosomal rearrangement involving ROS1 (c-ros oncogene 1), where one of many diverse gene partners fuses to the 3’ kinase domain of ROS1 and results in the constitutive activation of the ROS1 receptor tyrosine kinase. The ROS1-targeted tyrosine kinase inhibitor (TKI) entrectinib is an FDA-approved treatment for patients with these ROS1 fusions (ROS1+ NSCLC) and has dramatically improved patient outcomes. However, patients will eventually experience disease progression on entrectinib therapy as drug resistance develops. As a result, it is imperative to determine the underlying mechanisms of acquired resistance to determine the best sequential therapies. For example, next-generation ROS1-TKIs are being developed for use in refractory ROS1+ NSCLC patients with on-target mutations to the ROS1 kinase domain. However, these mutations have only been identified in approximately one-third of patients resistant to entrectinib; the mechanisms of resistance in the remaining majority of patients have yet to be elucidated. The aim of this study is to investigate these less understood mechanisms of entrectinib resistance in ROS1+ NSCLC. 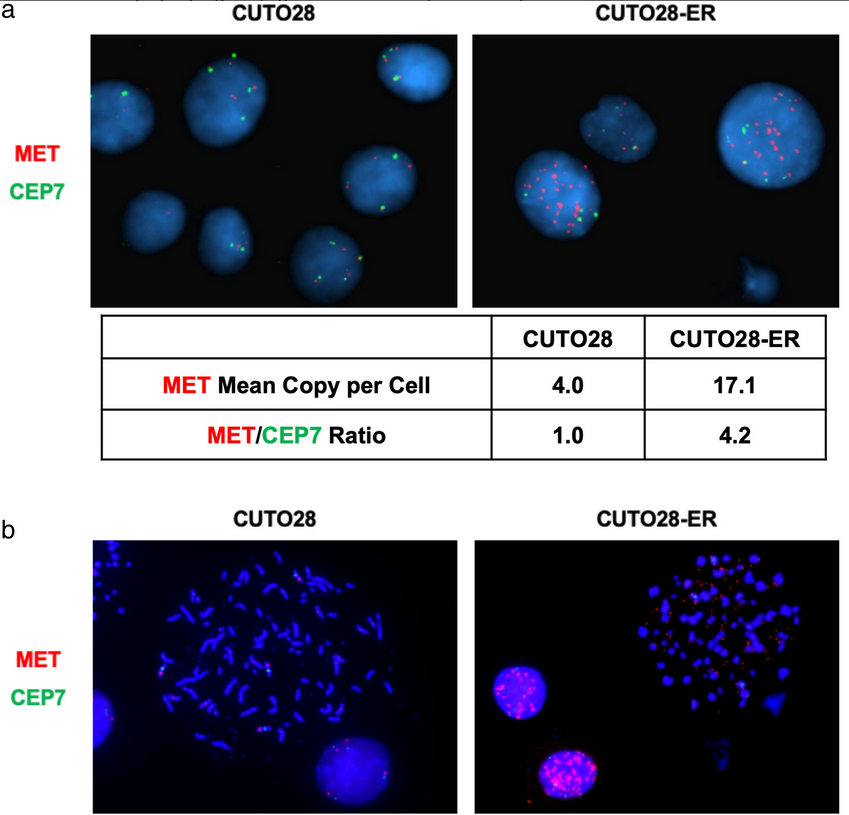 Next, fluorescent in situ hybridization (FISH) probes targeting MET and the chromosome 7 centromere (CEP7 control probe) were used to determine if CUTO28-ER cells had increased the expression and activation of MET through MET amplification. The parental CUTO28 cells had a MET:CEP7 ratio of 1.0, whereas the CUTO28-ER cells had a MET:CEP7 ratio of 4.2. This signified MET amplification. Metaphase FISH was used to determine if this observed amplification was occurring intrachromosomally and/or extrachromosomally. The mean number of extrachromosomal DNA (ecDNA) signals was 76.67 in the CUTO28-ER cells and 0.00 in parental CUTO28 cells. This showed that the amplification was occurring exclusively outside of the genomic DNA through ecDNA. Genomic qPCR found the ecDNA expression of MET to be 7.84x greater that of genomic DNA in CUTO28-ER cells. The authors found no evidence of other known mechanisms of increasing MET activation (e.g., MET exon 14 skipping, Y1003 mutation, activating point mutations in the MET kinase domain, MET fusions). Thus, the data suggests that ecDNA MET gene amplification was responsible for MET activation and led to bypass signaling in this entrectinib-resistant NSCLC cell line. To determine the clinical relevance of this discovery, the authors examined circulating tumor DNA (ctDNA) of 105 ROS1+ patients enrolled in the STARTRK-2 phase 2 basket study of entrectinib. Two of these patients (1.9%) were found to have MET copy number alterations; however, as the successful detection rate of ROS1 fusions via ctDNA in this trial was only 65% and copy number variations are more difficult to detect in plasma than ROS1 fusions, it is possible that the rate of MET amplification in ROS1+ NSCLC is even greater than this. This study highlights the need for clinical monitoring for MET amplifications in refractory ROS1+ NSCLC patients, as MET-mediated bypass signaling can be inhibited with crizotinib, capmatinib, or tepotinib to improve patient outcomes.